Una Certeza Persiste is the title of the show presented by Karina El Azem in late 2012 at the Recoleta Cultural Center’s Gallery J, part of the Sala Cronopios complex, a more than adequate space for a show that is extensive yet monolithic in its themes, and consistent. The artist emerged into Argentina’s art scene in the 1990s, when a trend evolved towards the valuation of popular urban taste in design. With many variations and concepts that are renewed with each outing, El Azem’s artistic language is already a brand of her own: a tension formulated between ornamental serial forms and ballistics, although from the start its very enunciation announces a paradox. The general look of the images provides the decorative element, an idea that was alien to and even rejected by the establishment of art theory, beginning with several functionalists and continuing with others in the late Twentieth Century, who expressed their preference for an art growingly more conceptual. The paradoxical play covers the latter ten as well, then: ornament-violence and ornament-concept. In the work of this artist, the combination is subtle and potent.

In ancient art, in some Eastern artistic tradition, in Arab art, the ornamental element was a highly developed basic principle, added frequently to its symbolic aspects. In turn, in the West, and especially after Modernity, ornamentation was displaced until it began to be interpreted in a different way in the past century through different movements. Thus, the artist has asserted her interest in using as an axis for her work the influence of ornamental arts in the development of Twentieth Century abstraction.

On the other hand, the countervailing element, violence—taken to extremes that had rendered a large portion of the planet’s inhabitants numb—while a global reality in our times, has also been repeatedly intertwined with the political and social history of Argentina. The artist’s formal propositions—geometric, symmetric, and decorative—have been loaded, like a weapon is loaded, with spent bullet casings, focused from their base end. Between surprise and horror, the viewer’s gaze is exhausted. For a long time terror, crime, fear, both private and the State’s, as well as what was experienced in the streets, was enunciated by means of pictorial and sculptural expressionism, among other devices. El Azem’s synthetic language is at the antipodes to those languages, yet it is no less effective; its provocative dual strategy makes it effective and consonant with the present.

Some of the works included in this exhibition are digital prints based on patters of photographs of bullet casings scanned into a computer and then colored, which generate abstract compositions that only reveal their identity on close inspection. A large mural in the background, made in latex, was composed by tracing 9-millimeter bullets. The recursive construction of repetitive patterns—such is the certainty that persists—is a characteristic of El Azem’s work. For other works, like 16 isoformas caliber 22, the inspiration was the work of conceptual artist Mel Bochner (USA, 1940), or Sigfried Kracauer (Germany, 1889-1966), a writer, sociologist, and cultural critic who, among other things, coined the term “mass ornament”. Also hanging over the exhibition was an implicit response to the widely read essay Ornament and Crime written by the functionalist Adolf Loos in 1908.

Also on exhibit was another work where the artist handles real situations, advised by two criminologists and a forensic coroner. This work is comprised of portraits of men convicted for various crimes who, years later, were set free thanks to the New York-based Innocence Project. Using DNA, this organization was able to prove their innocence. The figures are painted in blood infused with luminol, which causes any blood-stained surface to luminesce even after cleaning. When El Azem launched this series, the number of freed convicts was 23; today, they are 301.

In this way, the certainty of the exhibition’s title is nothing but the conceptual communicating thread that persists like an obsession in Karina El Azem’s work. It remains there as a symbolic act to safeguard art, on the one hand, and the ornament, on the other, when the latter recovers its meaning in culturally-rooted cases rather than in the futility of an undervalued design.

Finally, violence becomes hermetic because its fearsome images, the common idiom of our transparent society, hollowed by the mass media and the social networks, are no longer able to subvert its effect, and only multiply it. Karina El Azem’s paradoxical play returns it as a utopia. 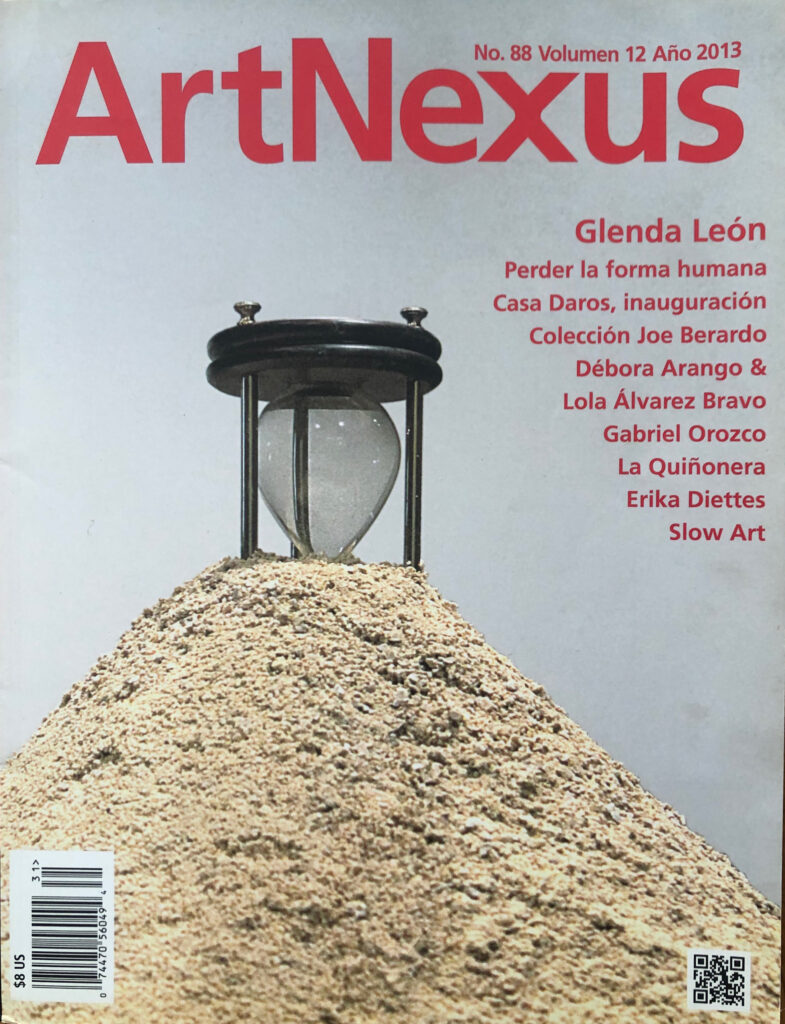 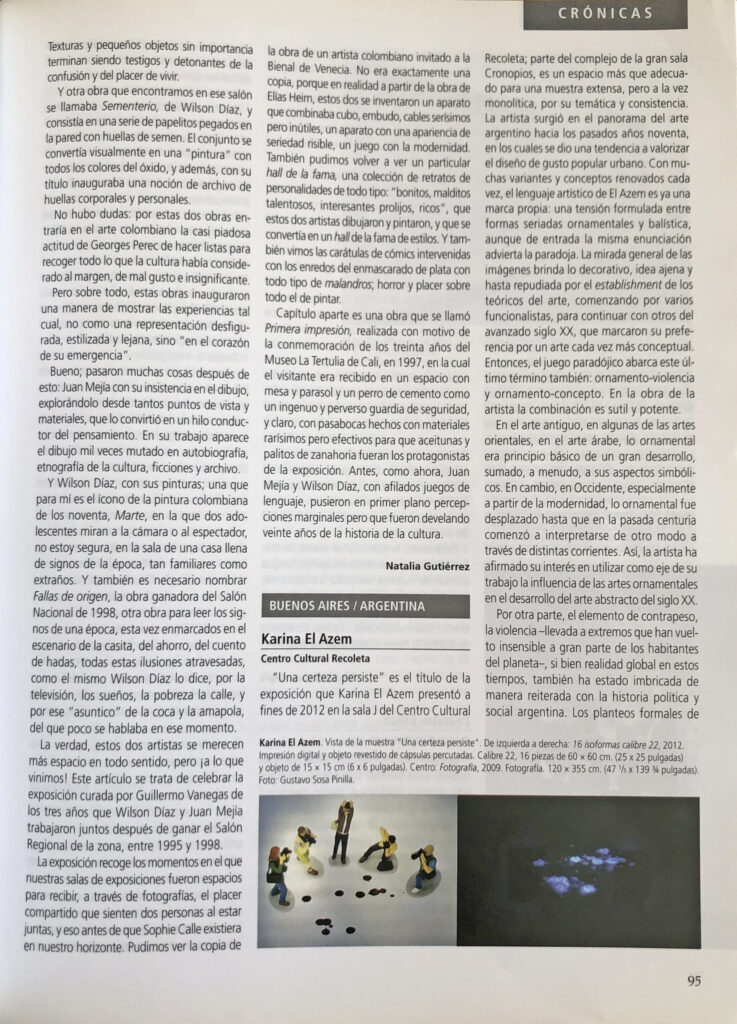 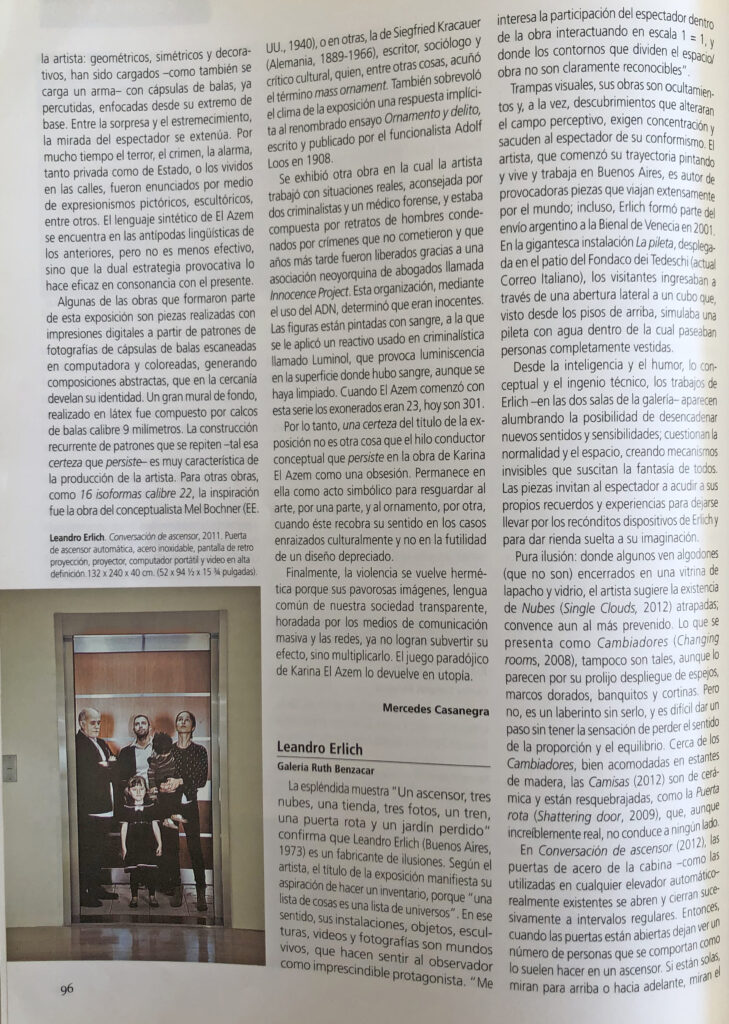